A few years ago, I was interviewed in Dallas on the Daystar Television Network about my new book “Unique: Telling Your Story in the Age of Brands and Social Media.” One of the questions host Marcus Lamb asked me was about failure. As we attempt to be original and innovative in trying to communicate our message to the culture, what happens if we fail? Is it OK?

I’m reminded of the scripture: “A wide door for effective work has opened,” the Apostle Paul wrote to the church at Corinth, “and there are many adversaries” (I Cor. 16:19). The potential for failure is certainly one of those adversaries. But I believe, as I read from Leonard Sweet, that because Jesus “…expects us to fail, and has provided us with a sacrament of failure, we can shake off the shackles that fetter us to success and be free to fail without guilt, without embarrassment, without timidity.

In the words of John Narrone, a theology which takes failure seriously “does not encourage fatalism, passivity, indifference to the world; rather it affirms that the man who cannot freely lay down his life is one whose ideals and values are already compromised. The man who cannot accept the possibility of complete, radical, personal failure in the carrying out of this Christian mission is not sharing that absolute poverty of spirit which characterized the freedom of Jesus to accept the divinely appointed means for his mission.”

I read recently on Beth Quick’s blog that: 75% of churches are dying or declining. 25% are growing – but 24% are growing from the alumni association of the 75%! It’s the “Walmartization” of American Christianity. 1% of churches, 3,300, maybe less than 2,000 even that are really growing. The 1% church.

That seems a small number from what I see out there. But the point is, are you reaching or recycling?

If we’re going to change that drift in the church, we’d better be prepared to try new things and be willing to fail in the attempt.

Again – Leonard Sweet: “Lacking the nerve of failure, we have suffered a failure of nerve – to dare to dream dreams, venture visions, and risk getting splinters that come from cutting against the grain.” 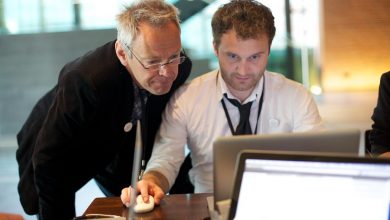 The Power of Delegation