Last year, on this online blog, I posed the question: “What’s Wrong with Christian Television?”  It started a firestorm of interest, and began an fascinating discussion of how Christians should be using the media to share the gospel in the 21st Century. But I also received a significant number of responses from people upset that I would even bring up the subject.

To be honest, most weren’t actually happy with Christian TV either, but it was the idea of “judging” that concerned them, saying that Christians have no business judging other believers.  I decided to explore some other websites and blogs that featured criticism of current Christian movies, political policies, theology, and even pastors who had experienced moral failure.  In nearly every case, many people responded the same way, indicating that as a Christian, it’s not our place to judge others.

They basically felt it doesn’t matter if you happen to be producing lousy Christian films, cheesy TV programs, or teaching wrong doctrine, these people are Christian leaders, and since their motivations were right, we have no business criticizing or judging their actions.  They apparently believed that criticism of believers is so distasteful, it’s far better just to let the problems continue than be critical or caught in judgment of another.

The mistaken attitude that we have no business judging other believers is so pervasive – especially in the Charismatic and Pentecostal wing of the church – that I think it’s time to re-consider what it really means.  The scripture from Matthew 7:1, “Do not judge” has been so misunderstood – particularly as it relates to Christians in the media, I think we need to re-examine it.  Did Jesus really mean that we should never judge others?

It’s interesting that when you examine the scriptures related to judgment, it’s not just the act of judging that Jesus is talking about as much as our attitude while doing it.  After all, common sense tells us that making judgments is an important part of life and we’re required to do it on a daily basis.  Who we let our children play with, what church to attend, where we work, who we associate with, how we spend our time, are all judgments, and if we didn’t make them, the quality of our lives would be poor indeed.

In a fallen and sinful world, people must be held accountable.  Today the culture tries to convince us that tolerance is the highest virtue.  Who are you to judge? is the rallying cry of deviant behavior, heretical teaching, and immoral living.  There’s nothing the enemy would love more than if we as believers gave up calling sinners to repentance, and what would our society become if we stopped evaluating student performance, calling failed leaders into account, or arresting criminals?   Without proper criticism and judgment, living in real community would become impossible.

Not only do we have to judge, but we are called to judge, and in today’s society, we need to be more vigilant about judgment than ever.  The question becomes, how do we judge like Jesus would, and how can we be sure that love, repentance, and restoration are the principles that we use in making our decisions?

First, anyone can have an opinion, but true judgment happens after serious examination, reflection, and consultation with the scripture.  We can’t be frivolous, especially when dealing with an alleged sin of a pastor or Christian leader, but if we follow scripture and investigate properly, we can arrive at a proper decision.  Paul’s writings to Timothy and also the church in Corinth are virtual manuals about judgment and correction within the context of the Church.

Second, lose the beam.  When Jesus taught in Matthew 7:3-5, he was speaking in the context of a hypocritical religious system that said one thing and did another.  The Pharisees couldn’t see clearly because of their own sin, and yet felt perfectly free to judge and condemn others.  Nowhere in the Bible does it say we have to be absolutely perfect in word and deed before we can practice discernment, but if we point the finger at someone else, we need to be living right before God and have a clean conscience.

Third, judging actions and judging people are dramatically different issues.  There’s never a place for gossip or personal attacks in the Church, but serious discernment on issues of doctrine, performance, quality, professionalism, stewardship, and skill are absolutely necessary.  We can love a pastor or media leader, but when their lifestyle becomes abusive or their teaching aberrant, it’s critical for the life of the Church that they be held accountable.   Likewise, when a Christian employee does a poor job at work, they need to be disciplined.  It’s not about them personally, it’s about their performance and the impact it’s having on others.

This may be my single greatest issue with the hesitation to judge today.  Evaluating a person is a grave and serious matter.  However, it’s of utmost importance that we judge the quality of our work, whether it be our teaching ability, people skills, preaching, or whatever.  If we’re ever going to raise the bar in the effectiveness of our ministries, we need the ability to evaluate the quality and worth of the work we do.  When God spoke to Solomon to build his temple, he didn’t hire good-hearted losers.  He hired the best craftsmen and artists in the land.

The gospel deserves no less than excellence.  Just as Olympic judges  determine the excellence of athletes, we need to call believers to excellence in the Christian community.  A hopeful Christian movie producer may have all the right intentions and motives in producing a movie, but if his skill is lacking, and the film is poorly made, what does that say to the culture about our stewardship of finances, or the botched presentation of the gospel?  Are we happy to sit back and watch other Christians damage our witness to the culture by producing lousy movies, or should we call them to a higher standard?

Recently, a major movie critic reviewed a new Christian film that he called, “…sadly and typically, another badly produced, over-acted, syrupy, spiritually themed movie.”  The reviewer had no problem with the Christian content – just the execution.  That’s the way the world looks at our work, because we’ve refused to hold Christian producers to a higher level of quality.

Recently, I spoke to a member of a mega-church in the South where the pastor had divorced his wife, but never missed a day in the pulpit.  The church member defended the pastor comparing him to King David, who he pointed out had sinned, but God forgave him and didn’t require that he step down as King.  I reminded him that David was the political leader of his time, not the spiritual leader.  The pastor in this instance could be better compared to Samuel – Israel’s spiritual leader of the time, and the scriptures require that we hold spiritual leaders to even higher accountability and responsibility.  (I also encouraged him to read a little further and see the staggering consequences of David’s sin.)

Remember that even after the salvation experience, we still are all fallen creatures, and without discipline and work, our natural tendency is often to take the easy way out.  Today, there is gross negligence and incompetence in numerous churches and ministries, and regardless of the intentions of the leaders, it’s hurting our witness before the world, and damaging our credibility in the culture.  As a church, we need to rise up, and stop our giving, write letters, and call these leaders into account.

The truth is, the Church today has it backwards.  We spend too much time criticizing the outside culture, and not enough time criticizing the Church.  Paul wrote in First Corinthians 5:13, “God will judge those outside.  Expel the wicked man from among you.”  And yet today, churches and ministries raise millions to boycott and protest network television, secular movies, and mainstream culture, and all the while, we’re dropping the ball when it comes to keeping our own house clean.

If we can’t have a conversation within the church about religious movies that fail, books that miss the mark, ministries that are ineffective, or pastors who fall short, then our future will be a long slide into oblivion.  But if we can humble ourselves, pray that God gives us discernment, and always keep the goal of correction and restoration in mind, then we should feel free to seek the truth in all things.

It never hurts to keep in mind that our ability to judge is always limited, and one day, we’ll all stand on level ground  before the ultimate Judge.  But until that time, I hope we will stop being afraid, and continue calling each other to task for our many failures and shortcomings, so that we can, as Paul said, “…press on toward the goal to win the prize for which God has called me heavenward in Christ Jesus.” 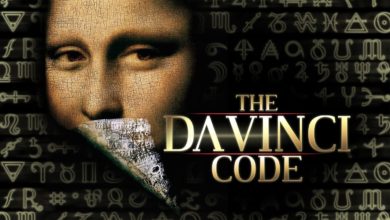 A Different Approach to The Da Vinci Code