I love to talk about the big picture stuff of change – especially as it relates to culture and the media world.  But we sometimes forget that getting our message understood by our friends, boss, employees, or team is critical to making the big picture happen.  Two types of communicators you need to understand are people who think by “talking about it”, and people who think by “doing”.  Neither one is better or worse, but they are dramatically different.


Which type is your spouse, boss, clients, or team?

I’m a doer. Maybe it’s my A.D.D., but I’m just not interested in details. I just want to see the dashboard. Tell me how fast we’re going, and if we have enough gas and I’m fine. When my team members bring me detailed reports, or ramble on and on, I mentally check out. When people schedule an appointment with me, my assistant tells them “when his eyes glaze over, the interview is done.” If you want to reach me, you’d better be thinking bullet points, not details.

By contrast, my wife Kathleen thinks by talking it out. Sometimes it’s a far better approach, but the other night was a perfect example of the contrast. We have 2 daughters in college, and Kelsey, the oldest has always had horrible migraines. Kathleen has spent hours in the bathroom holding her during violently ill episodes. The other night Kelsey’s boyfriend called us up at 1am. He was in the boy’s dorm and Kelsey had called him from the girl’s dorm throwing up and asked him to contact us. He wanted to know if he should take her to the emergency room? Kathleen knows more about her medications than me, so I gave her the phone and she started asking him about the situation. She got out of bed and walked downstairs.

I’m wondering what’s going on. After 10 minutes or so I got up and went downstairs, and Kathleen was still talking. “Well what happens with a migraine is…”  Blah, blah, blah….  Just chatting away while our daughter is puking her brains out in her college dorm.

I grabbed the phone and told Kelsey’s boyfriend in very direct terms, “Listen, get someone at the girl’s dorm to bring her downstairs. Make sure she has her insurance card, and meet her at the door with your car and get to the hospital. Call me when you arrive.” He responded, “Yes sir, Mr. Cooke, I’ll take care of it.”

Kathleen was processing the situation by talking about it, which I think is actually quite normal for a significant number of people. But I processed it by taking action. Kathleen’s girlfriends get together and it’s a non-stop chat fest. I get together every once in awhile with a group of buddies and we sit in a friend’s backyard overlooking Los Angeles, and light a fire. Sometimes 15 minutes go by and we don’t say a word.

The point? In the process of changing your company or organization, we’re constantly frustrated because we don’t take the time to learn how people communicate. It’s not a matter or right and wrong, it’s a matter of knowing which one you’re dealing with and taking action based on that knowledge.

Know who you’re talking to and how they process information, so you can make sure the message you transmit is the message that’s received.

Christian Movies and The Problem of Over-Acting 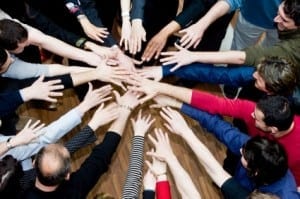 The Secrets of Building Great Teams