More and more people like the “New Atheists” are not only dismissive of religious faith, but they’re angry about it, to the point of declaring that belief in a Supreme being must be a sign of mental illness. In that increasingly hostile atmosphere, it’s becoming more and more challenging to respond when asked about our faith. David French, writing in the National Review, said recently:

“From my own life in places like Harvard, Cornell, Manhattan, and Center City Philadelphia, I’ve been struck by the extent to which otherwise reasonable-sounding secularists are consumed by rage and hate at the very thought of orthodox religious belief. You can have a perfectly civil conversation about, say, Putin’s Russia, but bring up Jesus and all bets are off. And professors can be among the worst. In fact, their outright bigotry against Evangelicals is well-documented. It’s bigotry for the sake of tolerance, hate for the sake of love, and divisiveness for the sake of unity, and all the while the angry atheist mind sees no contradiction at all.”

In an interview for World Magazine (August 8, 2015), John Stonestreet had some advice about engaging people who ask tough questions about our faith:

“How can churches do a better job in preparing young people to deal with tough cultural questions? A lot of times we teach the Bible, particularly at a very early age, as if it’s a random collection of stories and sayings, but not as the grand underlying narrative of everything. At the heart of a lot of our troubles is that many teenagers and young adults believe in what Christian Smith, now at Notre Dame, calls moralistic therapeutic deism: They invite God into our world when they need to behave or feel better about ourselves. Maybe that’s because from their earliest age, from Sunday school lessons and youth group lessons, almost every way they’ve heard the Bible taught is moralistic or therapeutic. David and Goliath, here’s how you beat your giants.

How can we do a better job of talking with non-Christians about difficult subjects? My friend Frank recommends that before getting into a testy situation we ask, “Do you consider yourself an open-minded and tolerant person? Are you open to considering other views? Because a lot of people aren’t, and if you’re not then we probably shouldn’t have this conversation.” And if someone says, “Yes,” you can say, “Well good, because I sense my view might be different from yours.” We need some groundwork if we are to listen to one another and respect each other.”

Perhaps establishing those boundaries up front will save you misunderstanding and confrontation later.  What do you think about John’s advice? 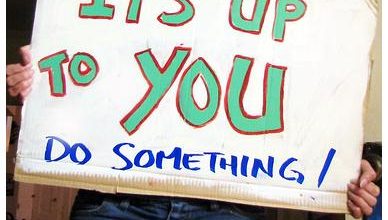