For all the readers who responded with great comments about why “The Nativity” failed, here’s a fascinating look from writer and cultural commentator Mark Joseph. He’s opened it up to a much bigger issue of how to repeat the success of “The Passion of the Christ.” Let me know what you think:

The ‘Passion’ Playbook: The 10+ Commandments of the New Hollywood
Tuesday , December 05, 2006
By Mark Joseph

In a recent column, nationally syndicated religion columnist Terry Mattingly cited Hollywood executives who believe they are following what they term the “Passion Playbook” with the release of the film “The Nativity Story.”

As the dust settles on this box office disappointment, Hollywood veterans are again likely to use the film’s failure as another indication that the enormous business that Mel Gibson’s film did was a fluke that can never be repeated.

But to paraphrase Lloyd Bentsen: I knew “The Passion” … and “The Nativity” is no “Passion.”
To be sure, there is indeed a “Passion” playbook, which unfortunately has not been followed since it rocked the box office in 2004.

For Hollywood executives who seem to have learned many of the wrong lessons and ignored most of the right ones, here is the real “Passion” playbook, which if followed correctly is guaranteed to produce box office magic.

1) Have a major star associated with the project. Mel Gibson may only have been the director, but he was the player in the “Passion” saga. Media and the interest of the American public nearly always revolve around a person. It’s almost impossible to create a box office sensation unless there is a personality who can draw interest to the project. He or she must be willing to travel to meet faith community leaders across the country and pitch the movie.

2) Whenever possible, choose a story that is already well-known and loved. That way, you won’t have to spend months educating the public about who the character is or what the story is about. People knew “The Passion” was about Jesus Christ and the greatest story ever told. They didn’t have to be sold on it. He had strong name ID.

3) Spend some money on the production. Gibson spent $25 million. That’s good. People, even deeply religious people, want to see that real money has been spent on a film. There are exceptions to this. “Facing The Giants,” for example, was made for $100,000 and earned $10 million. In general, however, the faithful are sick of being condescended to with low-budget schlock.

4) Spend at least a year taking the film around the country to as many leaders of as many groups as possible. Studios are famous for refusing to show a film until just before it’s released, but news travels at a much slower speed in faith-oriented circles. Many traditionalists, especially older ones, don’t get their news from “Entertainment Tonight” but rather from their Aunt Helen who heard about it from her friend who read it in a newsletter published by a religious group six months ago.

If your movie is coming out in December, have a rough cut ready in January and begin showing it around the country to every group you can think of. Show it early; show it often.

“Narnia” did a fraction of the business it could have because studio executives refused to show the film early enough. In contrast, Gibson showed his film to key leaders six months before its release and solicited feedback from them and even made some changes as a result. Translation: Thousands of Americans considered themselves to have been co-producers on the film because they had given the director their “notes.”

5) Include in your cast an actor who is a person of faith and well-known to the Christian community to play a role (even a small one) who will then be your ambassador to the faith community who can appear on faith-oriented programs to talk about the film.

6) Use an ancient language and include lots of violence — just kidding. “The Passion” was a hit in spite of the subtitles and relentless brutality. The faithful loved the film so much that they were willing to read the subtitles and the violence was purposeful and thus meaningful. But in nearly every other case, these devices will not work and shouldn’t be tried.

Millions of Americans go to movies to be uplifted. They see enough violence on the evening news and if they wanted to hear a foreign language they’d live in Europe. While we’re on the subject, lose the crude language unless the story collapses without it. No one has ever left a movie complaining that the language wasn’t foul enough; plenty leave early because they don’t want to hear their favorite deity mocked.

7) Welcome controversy. A full year before the film was released, Gibson was on TV arguing that the New York Times was attacking him. Most viewers didn’t know what he was talking about, but his marketing campaign was in full swing. News of the MPAA attacking the film “Facing the Giants” for its religious content hit the film a full four months before its release, driving interest in the film.

8) Make a film that appeals to both secular-leaning Americans and devout Christians simultaneously. Yes, it can be done. Polling indicated that “Passion” viewers were about half evangelical Christians and half more secular Americans, a surprising result considering the theme of the story. Yet, it appealed to different people for different reasons. Some wanted to see what the controversy was about. Others loved the hero. Others saw it as a work of art. Some viewers enjoyed “Narnia” because it was about a brave lion. Others saw their savior Jesus Christ in the lion.

10) Look to the Christian basement for stories. Hollywood as we know it is bankrupt of story ideas. How else to explain “The Dukes of Hazzard,” “Bad News Bears” and “Bewitched”? In contrast, there are thousands of interesting stories in the basement of Christendom that have been gathering dust over the last 2,000 years that are waiting to be told. In addition to “The Passion,” three 50-year-old stories recently made it to the big screen: “Narnia,” “Lord of the Rings” and “End of the Spear,” and these have been among the best-loved Christian tales that were quietly cheered on in faith communities around the country.

These are the tip of the iceberg. Since this community long believed movies to be evil, very few of their favorite stories have even made it to film. There are thousands more where those came from and they’re gathering dust in the basement waiting to be adapted for film.

Bonus: If you have obeyed the first 10 commandments, congratulations, now you must take the release wide — onto 3,000-plus screens. If you don’t, you are sending a message that you’re not confident about your film and people smell fear a mile away.

Forget building momentum like “My Big Fat Greek Wedding” did. That will not work, you must make sure that the film is available all across the country to ensure maximum first-weekend turnout and to empower viewers to “vote” with their pocketbooks.

During an early “Passion” screening, one prominent Hollywood executive actually told Gibson he should put the film in theaters for free since people were unlikely to pay the money to see it, but would buy the DVD instead. Gibson wisely rejected the ridiculous suggestion because he understood that the devout wanted to “vote” with their $8 and send old Hollywood a message. That “voting” will only be possible if there is a “precinct” nearby and if the message can be sent on the first weekend — the moment of maximum impact.

Mark Joseph is the author of “Faith, God & Rock ‘n’ Roll,” editor of Pop Goes Religion and founder of the MJM Group. He produced the rock soundtrack for “The Passion of The Christ” and worked in development and/or marketing on films such as “The Chronicles of Narnia,” “Ray,” “Because of Winn-Dixie,” “Holes” and “Facing the Giants.” 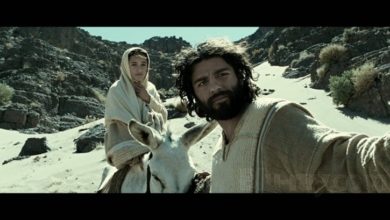