I was 36 years old, had been fired from my job in the Midwest, and our family made the decision to move to Los Angeles. We stopped in Las Vegas for a couple of months to live with Kathleen’s parents, while we scouted LA for the right location and house. During that transition, a long time family friend who happened to be a graphic designer introduced me to the marketing director for the Circus Circus Hotel and Casino. She also led the marketing efforts at other hotels like Excalibur and the Sahara.

She hired me as a freelancer to write advertising copy for the hotels, which included print ads, naming items on the restaurant menus, and promotional copy for the boat racing team owned by the hotel’s CEO.

But after a year or two, she presented me with a really interesting challenge.

At that time (the 90’s) Las Vegas was repositioning itself to be “family friendly” and Circus Circus was opening The Adventure Dome – a giant glass bubble featuring amusement park rides particularly designed for younger kids. It would be one of the largest indoor amusement parks at the time, and it was about to be finished and the hotel needed to name the rides.

I gave it a shot, but wasn’t really happy with the names I was creating – especially since the names needed to excite elementary school age kids.

So I decided to go to the source.

With the permission of our oldest daughter Kelsey’s second grade teacher, I went into her class, described each of the rides, and the kids jumped right in.

“I have a rollar coaster that will take you on a ride through desert mountains.”

Some kid in the back shouted out “Canyon Blaster!”   Check.

“How about another desert ride that spins in circles and goes up and down?”

“What about a ride that flings you upside down, side to side, and all over the place?”

My daughter Kelsey and a group of her friends screamed “Chaos!”  Check.

We went down the list until all the rides were named.

The next day I presented the names to the Circus Circus marketing team and they didn’t change a thing. 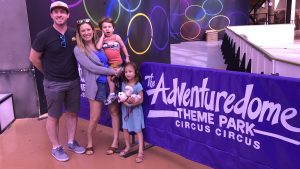 It’s been more than 20 years since that happened, and a few weeks ago, Kathleen and I took Kelsey, her husband Chris and their kids to Las Vegas to get away for the weekend. During the trip we took the grandkids to The Adventure Dome, and to my surprise, most of the rides are still there, and they still have the same names. In the amusement park world, that’s a lifetime.

The lesson?  When you have a challenge, go to the source. Find the audience that you need to reach, and get their advice. Through focus groups, surveys, and even casual conversation, you’ll often hit the target much more accurately – especially when you include stakeholders or anyone who will interact or benefit from the project.

But one thing: Don’t tell Circus Circus that The Adventure Dome rides were named by my daughter’s second grade class in Burbank, California.

I never mentioned that in my presentation….

A Word about Judgment…